Mrs. Franks is a certified instructor and has been teaching for over 40 plus years. Extensive English and Western Disciplines has been the focus of her horsemanship for 46 years.  Dedicated to horse and rider development, Franks has coached students to Olympic Young Rider Competitions and to Championships in Glad Stone, New Jersey. Franks is also an NRHA money and trophy earner and has numerous AQHA points in all around divisions.  Growing up, she was very active in 4H showing horses and earning trophies and ribbons with Show cattle. Franks has owned and showned  several NRHA champions including  Shining Marshall, Son of Shining Spark and Miss Lucky Tatoo and was a Futurity Finalist in 2000. Pepantari was another Stallion that Campaigned from 2000 to 2002 with Multiple Wins and finishing 3rd in the Top Ten Open Horses in NRHA. He went on to produce two foals for the Franks family. An additional Community project that captures the hearts and hands of the NB Equestrian Team is by assisting  children from the Tennessee Baptist Children’s Home to learn to ride and share in the joys of being “on the farm”.  We share ride times with the YMCA YCAP program for summer inner school students to visit and learn to ride also. Both are just a few of the dedicated  commitments that Franks makes for the community and to teach her riding students of having a helping hand and building relationship and learning to become a gracious leader.

In addition to the normal day to day work inside the arena, Trish for fun when time allows competes in trail riding competitions and has trained with many clinicians over the last 35 years across the United States and Canada. Her most daring   adventure in 1998  was taking 3 horses to the bottom of the Grand Canyon (when horses were allowed) and spent the night at Phantom Ranch then returned the following day for the uphill climb. Franks has spent several years assisting with guided trail trips in the Pecos Wilderness in New Mexico, Arizona and Colorado.

In addition to Equine Related Activities and Barn Management and teaching Franks has two grown children, Brittany and Martin Franks and their families with four wonderful grandchildren, Chase, Reid, May and Lincoln Franks. 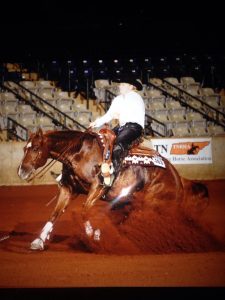 Brittany is now a practicing attorney, in addition to her management responsibilities of the Riding School and being the Head Coach of the Reining Team and the Western Division of the Natchez Bend Equestrian Team Inc. 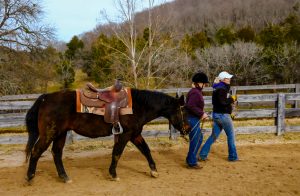